Don Newcome died yesterday. If you’re not a baseball officiando you may not have ever heard of him, but he was an important figure to baseball, the Dodgers, Los Angeles, and our country. You may wonder why a real estate blogger would take the time to write about a baseball player. Don Newcome’s

story is the story of a changing America. The attitude of the country was shifting. The integration of baseball was the first step in popular culture towards equality, but when it came to housing, the year of Don Newcome’s arrival would prove to have negative ramifications that we still deal with today.

The year was 1949. Jackie Robinson had broken the “color barrier” of major league baseball just two years earlier. Baseball, America’s game, finally allowed people of color to join in. By 1949 there was still just a handful of black ballplayers, among them was the pitcher Don Newcome. Tall and powerful, Newcome was a man of firsts. He was the first African American pitcher to win a World Series game, the first to win 20 games and the first to win the league’s Most Valuable Player and Cy Young award for the year’s best pitcher in the same year. For the African American communities, seeing ballplayers like Robinson and Newcome excel was a great source of pride. Little did they know that at the same time, the Federal Government was conspiring to segregate America.

Segregation was nothing new in 1949. The landmark legislation of 1954, Brown vs. The Board of Education outlawing segregation in schools, was still 5 years away. Following World War II, where black soldiers fought and died with distinction, returning servicemen found little had changed back home. The South still lynched black men for looking at  white women, had white and colored only bathrooms, restaurants and hotels. But the South wasn’t the only place segregation and inequality existed. In fact, the Federal Government itself began a systematic push to restrict black homeownership. The 1949 Housing Act was designed under the guise of helping Americans buy homes by easing the ability to finance a home purchase. But it also gave the FHA tacit approval to rank neighborhoods for the purpose of restricting lending to white only neighborhoods and not just in the South. This happened in every city across America. Communities like Levittown in New York sold to whites only. This has been referred to as “White Flight” and lead to the creation of the modern American Suburb, the modern American white -only -suburb.

It’s hard to imagine today that a Government of the People and for the People would create a system that would specifically suppress a large segment of the people but that’s exactly what the 1949 Housing Act did. It allowed the FHA to create a color coded map which ranked geographic areas for lending, restricting which areas would be eligible for FHA insured loans. This served to restrict access to financing for many urban areas that had higher level of nonwhite residents. Today we call this Redlining 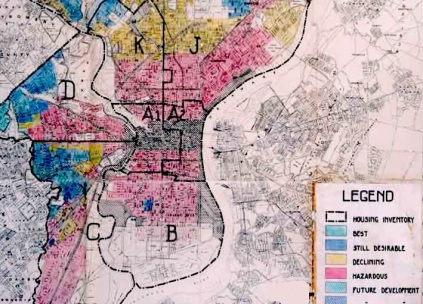 and this phrase comes from the lines drawn around certain neighborhoods (check out local neighborhood sales here ). The effect of restricting the ability to finance meant, people of color couldn’t buy, couldn’t finance to make repairs and as a result neighborhoods rapidly deteriorated. The Act also had a provision that lead to the demolition of slums that supposedly was to spur building in declining neighborhoods but actually removed housing instead of creating it.

The impact of The Housing Act of 1949 is still felt today. As history has shown, people who own their homes have more wealth and pass that wealth to future generations. Since blacks weren’t allowed to buy, there was less wealth to pass and this is in large part why African American household wealth is so much lower today than that of the white population. Drop a stone in a lake and the ripples go all the way to the shore.

It is in this context that we look to a man like Don Newcome. He broke down barriers that would eventually culminate in the Civil Rights Act of 1964 and the Fair Housing Act of 1968. This is Don Newcome’s legacy and his contribution to this nation is invaluable. Want to chat about this article or real estate, just give me a call or send me an email.

Tim Freund has been a licensed real estate agent/broker since 1990. He spent 14 years as a new home sales rep, ran his own boutique resale brokerage for 5 years and is currently an Estates Director for Dilbeck Estates/Christie's International Estates in Westlake Village, Ca. Tim is a Certified Residential Specialist (CRS), an Accredited Buyer's Representative (ABR), a Corporate Mobilty Specialist (CMS) and a Senior Real Estate Specialist (SRES). Tim has successfully negotiated a loan modification for a client and has been a professional short sale negotiator. Tim sells along the Los Angeles and Ventura County lines, “from LA to Ventura..”. Tim has been married 31 years, has 2 children, is a native Californian and has been a resident of the Conejo Valley since 1991.
View all posts by Tim Freund →
This entry was posted in Real Estate. Bookmark the permalink.